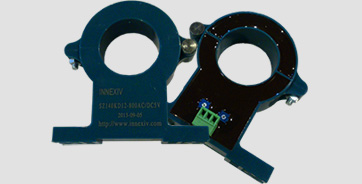 The ACCT is an evolution of the active transformer first proposed by Hereward in 1960. Compared to the Hereward transformer, the ACCT presents much lower noise, a DC offset of the output reduced to a very small value and excellent long-term stability. The sensor is built with a single winding, which requires only one wire pair between sensor and electronics; this allows much better EMI rejection when long cables are used.
INNEXIV AC current sensors allow you to take measurements of large AC currents. The current output mode makes it possible to connect the AC current sensors to the direct current input terminals of the INNEXIV Power monitoring module or any Power Scope for measurements. With a single power meter, small currents can be measured by direct input and large currents of up to 1000 Amperes using the current sensor. The INNEXIV AC current sensors can be used for large currents and power measurements in a wide range of application areas, such as BTS sites (Load Currents), hybrid electric and pure electric vehicles, batteries, inverter motors, energy, railway, and industrial motors.